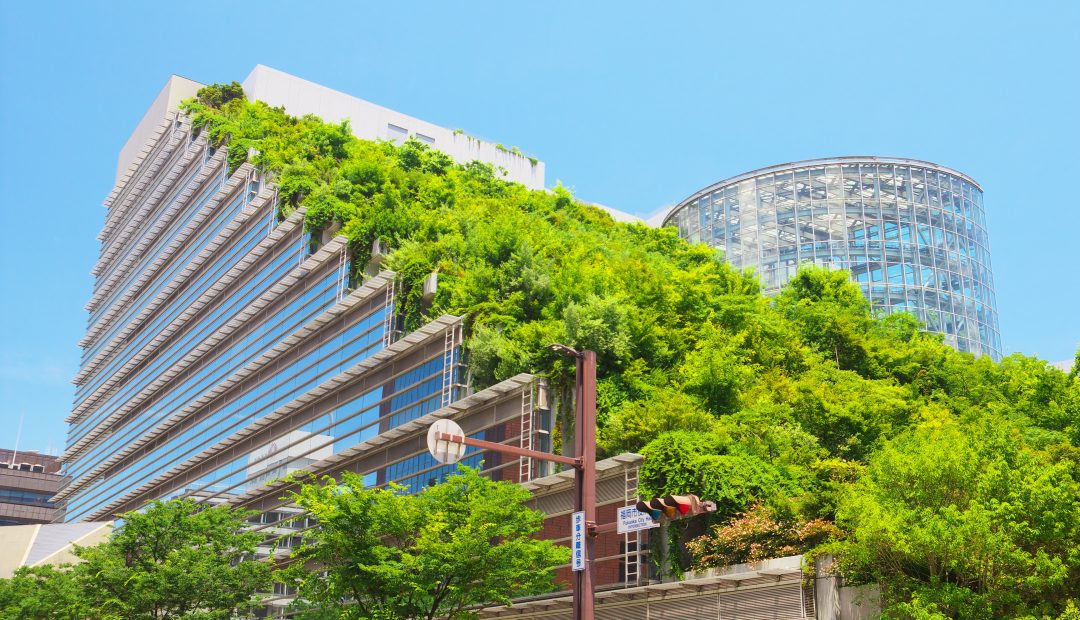 Recently, some buildings in cities around the world have begun to use the little space they have to create beautiful, vertical, gardens that bring the wonders of nature to the urban jungles where we live and work. They can be seen as living art and have been the center piece of some impressive structures. From Singapore to Colombia, you can travel across the globe and see urban gardens that seem too beautiful to be real.

At first glance the Park Royal Hotel looks like an overgrown jungle stuck in the midst of bustling Singapore. The high-end office and hotel tower features an exterior absolutely overrun with vertical gardens, contoured green pathways, water features, and leafy terraces. In addition to its beauty, the 12-story high tower is the picture of eco-friendly and energy efficiency. It features solar power, automatic light, rain and motion sensors, rainwater harvesting and recycling mechanisms. Because of its innovative and sustainable design the Park Royal has been awarded the BCA Green Mark Platinum, which is the highest rating for green buildings in Singapore, and the Solar Pioneer Award as one the first buildings in the hospitality sector to harvest solar energy. It not only magnificent to look at, but also a step towards a more green future for the planet.

Situated right in the middle of Fukuoka City, Japan is the ACROS Fukuoka Prefectural International Hall. The building has two very distinct sides, the one looking like a conventional office building and the other with a huge terraced roof that merges with a park. The garden terraces, which reach up to about 60 meters above the ground, contain around 35,000 plants from 76 species. It also features a large semicircular atrium in the center that allows visitors to have an amazing view of the gardens. The inside is home to offices, shops, conference spaces, and a symphony hall. The building was constructed on the last remaining green space in the city center, so the architects, Emilio Ambasz & Associates, designed it to preserve as much green as possible while still filling the need for a large office building. In addition the building strives to be as eco-friendly and energy efficient as possible. The green roof reduces energy consumption of the building by keeping the temperature inside more constant and comfortable, as well as capturing rainwater runoff to support the plants and small wildlife in the garden.

The Waldspirale in the city of Darmstadt, Germany is one of the most bizarre looking apartment complexes in the world. It literally translates to “forest spiral” in English, which is a perfect way to describe the colorful, winding building with a forest growing on top. The building is truly unique, designed by Austrian artist Friedensreich Hundertwasser. Each of the 105 apartments inside is different and the facade features a total of 1048 windows, of which no two are the same shape or size. Within the spiral center is a beautiful inner courtyard, cozy restaurant and bar, and several playgrounds and recreation areas for residents to enjoy. It is such a magical building to look at, you might think it came right out of a fairy tale

The city of Bogotá, Colombia is home to the worlds largest vertical garden. The Edifício Santalaia’s 9 stories are covered in over 33,000 Sq. feet of plants. It’s almost like a living building. This high-end multi-family residential building situated on the eastern edge of city brings a pop of color to the densely populated capital. Created by biologist and botanist Ignacio Solano of Paisajismo Urbano, in collaboration with green roof design firm Groncol, this urban garden features over 115,000 plants of 10 different species.The building features a unique way of watering all these plants. It uses Paisajismo Urbano’s patented “F+P” hydroponic system, which consists of a series of pillars that are fed by 42 irrigation stations to help keep the plants nourished, while water use is kept to a minimum by treating and reusing water taken from the apartments’ showers. It is designed to optimize water consumption and be a more sustainable way to keep the garden green and lush.

Les Halles d’Avignon is one of the best known spots in Avignon, France. People come from miles around to shops, eat, drink, and socialize in the warm atmosphere of the indoor market. But one of the defining features of the building is vertical garden across its facade, covered in over 450 species of plants rooted in small pockets and fed by a system of irrigation behind its metal frame. It is a live piece of art decorating the outside of the already popular market place. Though the market itself was established in 1899, the vertical garden was added until 2005 and designed by Patrick Blanc, a botanist and researcher at the CNRS (The French National Center for Scientific Research). The addition of the wall of green gave the exterior a new and exciting look that tourist flock to get a glimpse of.

RISE UP! Exhibit is a Must-See at the Newseum in Washington D.C.

The 5 Best Places to See The Midnight Sun This Summer!