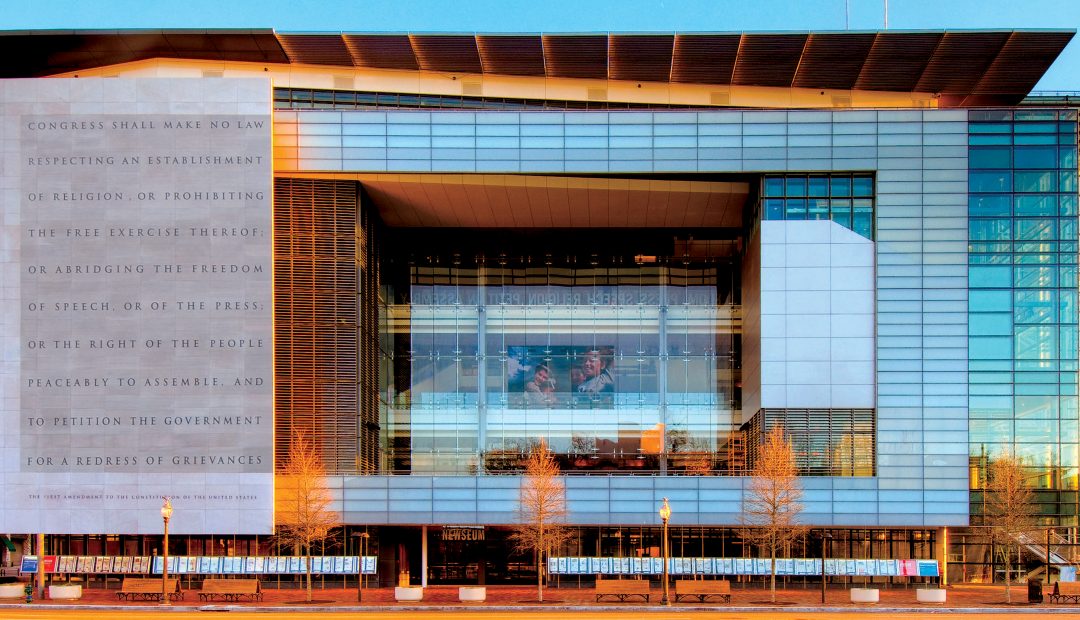 In celebration of the 50th anniversary of the Stonewall uprising, the D.C.-based Newseum has launched their exhibit, RISE UP: Stonewall and the LGBT Rights Movement. The exhibit is open now through December 31, 2019. To get more information on the exhibit and the Newseum as a whole, I was lucky enough to speak with their VP of Content and Exhibit Development, Patty Rhule.

As VP of Content and Exhibit Development, Patty overseas a talented team of writers and editors who produce the Newseum’s permanent and changing exhibits. Before coming to the Newseum in 2007, she worked at USA Today in a variety of editing roles. She is a founding editor of USA Today, On a personal note, from my interview with Patty I can tell you that she is an extremely friendly person. She’s not only highly optimistic, but also extremely talented and bright. She’s the kind of person that truly believes in this country, and from speaking with her, the feeling becomes contagious.

Can you explain to me what the Newseum is, and its history?

The Newseum was founded by Al Neuharth – the man who founded USA Today. He had a deep belief that the First Amendment was the cornerstone of democracy, and that freedom of the press was an important part of that. Neuharth originally created the Freedom Forum, which is dedicated to free press, free speech and free spirit for all people. It’s a nonpartisan foundation that champions the five freedoms of the First Amendment.

(If you’re like me and may have innocently forgotten what those are; it’s freedom of religion, freedom of speech, freedom of the press, freedom to assemble peacefully, and freedom to petition the government.)

How did the Freedom Forum lead to the Newseum?

Neuharth felt that people didn’t know much about the First Amendment, and didn’t respect the industry of journalism as they should. He wanted to create a space where people could learn about journalism, see who journalists are and what they do, and come to see its importance and power.

The Newseum now has 15 galleries and 15 theaters, and is filled with historical newspapers from the past 500 years, including a 1787 issue of the New Haven Gazette that includes the new United States Constitution. Other highlights in the Newseum include the powerful 9/11 exhibit, where the walls are covered in front-page headlines from around the world, as well as the remains of the antenna from the World Trade Center’s north tower.

Your new exhibit RISE UP! is making headlines around the country. Can you tell me a little about what visitors can expect?

Rise Up! is our newest exhibit that opened at the beginning of March and is all about the LGBTQ experience in America. We’ve had a yearlong series of programs leading up to its launch, which included a very powerful evening with Matthew Shepard’s parents last fall. We’ve also hosted pioneering LGBTQ lawmakers U.S. Sen. Tammy Baldwin and former U.S. Rep. Barney Frank and actor and activist Alan Cummings.

The exhibit itself starts with pre-Stonewall America — back when openly gay people couldn’t be hired in the federal government, couldn’t show affection in public, were arrested, and risked losing everything, not to mention the fact that being gay was still considered a mental illness. Then we take visitors through the Stonewall riots, and share how powerful that moment was and how it completely blew open the door for the LGBTQ rights movement to evolve. After Stonewall, the LGBTQ community used their power of free speech, press, assembly, and petition to fight for rights and acceptance.

The exhibit is loaded with artifacts, such as early LGBTQ newspapers and magazines, Gilbert Baker’s sewing machine that was used to sew the original Pride flag (as well as one of the flags itself), a letter that Harvey Milk was carrying while he was assassinated, and more.

The exhibit takes you right up into the present day, discussing how popular culture — TV shows, movies, and sports — including Will and Grace and Brokeback Mountain paved new ground for acceptance of LGBTQ people, and how the trans community is facing many distressing issues to this very day.

This exhibit is very relevant today, because of what we’re seeing with the so-called “bathroom bills” and the military ban on transgender people serving. It’s important for everyone to see how hard the LGBTQ community has fought over the decades, and how activists are using their First Amendment freedoms today to challenge injustice and fight for change.

What happens to the Rise Up exhibit after it concludes its time at the Newseum?

The rise up exhibit will begin traveling around the country. We want to make sure that even people who weren’t able to make it to D.C. can have a chance to experience the powerful message that Rise Up provides. So, keep an eye out for Rise Up! Around the country!

How about any closing remarks for our readers? With this current age of fake news, our President attacking the press, and a massive division amongst Americans… what can you say about free speech and the press in this modern era?

I’d say to be smart. Right now, we have so many voices being heard, and for the most part, I think that’s an amazing thing! But there are people out there who are saying things that aren’t true. It’s our job as consumers to be smart about what we listen to. Is the headline clickbait? Is this coming from a news organization with trained reporters, or some random blogger? Is this from a website that you already know will simply reinforce your views?  Huffpost readers should read what Fox News says, and Fox News readers should read Huffpost! If nothing else, you’ll at least know where the other side is coming from.

But we need to remember that facts are more important now than ever. We need a free-flow of ideas. We don’t want to have to somehow create a system of judging what is and isn’t allowed to be said. Who will do that? The government? Personally, I’m not ok with that. And yes, there will always be people out there who believe in the conspiracy theories, but as a whole, silencing any voice is dangerous. Let all voices be heard, but be critical and smart as to whom you believe. Know the source, know the story, know any bias, and come to your own conclusion. Like I said, I’m an optimist. I believe in us as Americans.

Be sure to visit the Newseum from now until December 31 to see their amazing RISE UP! exhibit. Click here for more info on the Freedom Forum.

5 of the Most Fascinating Urban Gardens in the World