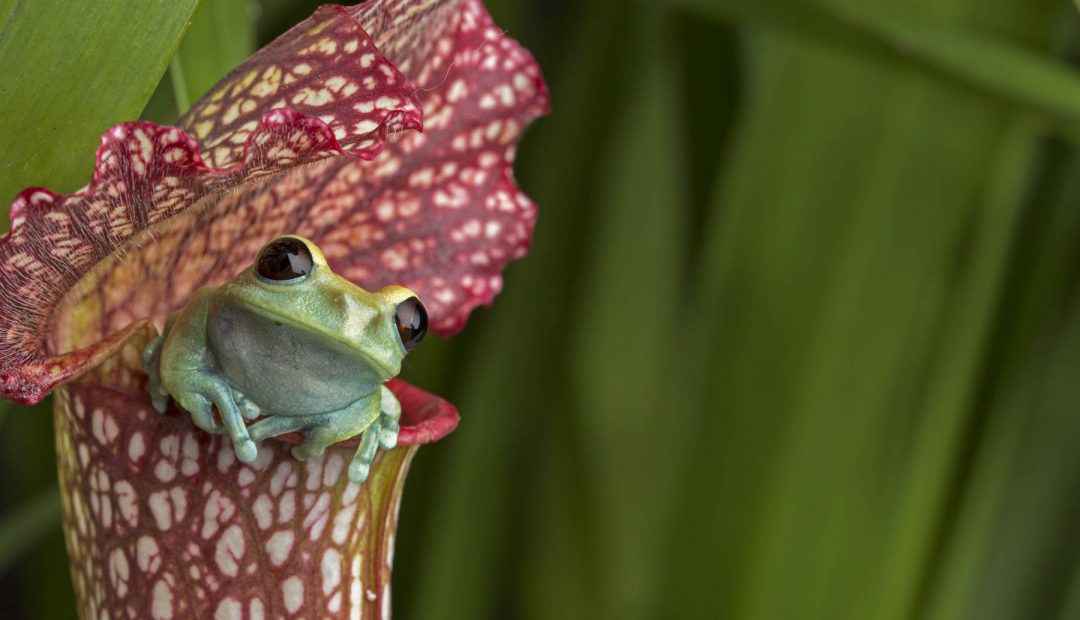 Your grandma probably liked to pull the dandelions out of her garden, saying they were weeds. She probably also told you to eat your spinach, saying it’s good for you, but what would your grandma say if you asked her about a corpse plant?

I’ve compiled a list of the craziest, most bizarre plants from around the world. These flora specimens are so insane (and sometimes downright terrifying) that you’ll be forever thankful that the worst thing growing in your yard is crab grass.

Pitcher plants can be found all over, and are one of the coolest carnivorous plans out there. Most pitcher plants lure insects into their cup-like pitchers, then trap them inside by folding down the leaf on top to prevent escape, The bugs are then slowly digested by the juices inside the pitcher.

When you’re a pitcher plant that’s grown to a foot tall, and your pitcher is large enough to contain 2 liters of water, are insects really enough food anymore? Nope. So then where to go? What to eat?

Mammals, obviously. That’s right. the Attenborough’s Pitcher, named after the famed environmentalist and TV host, David Attenborough, eats rats, mice, shrews, and whatever other animals are unfortunate enough to hop inside, hoping to find sweet nectar. The massive plant is both horrifying and fascinating.

This isn’t a scene from Jumanji, although it easily could be. This is the infamous “corpse plant” Titan Arum. These plants can grow to be terrifyingly massive. Species in the wild have been reported to be almost 20 feet tall!  The plants are so notorious because they rarely bloom. They can go years without blooming, sometimes going as many as ten!

But once the bloom does happen, well, it’s pure magic…but only if you enjoy a plant opening up and releasing a stench so foul that people compare it to a rotting corpse.

A lot of botanical gardens have corpse plants, and their blooms become big public events. In fact, it’s possible that the gardens in your city may have one, and you just don’t know because the plant hasn’t bloomed in a decade. From what spectators say, these rare events are truly spectacular and not to be missed!

If you’re looking at this picture and saying..This is just some trees, you’d be wrong. This is technically just one singular tree. Meet Pando the tree that covers 106 acres. Pando is this planet’s largest living organism, and he’s all-American.

Pando is the clonal colony of one 80,000-year-old male Quaking Aspen. Aside from being the world’s largest organism, his age also makes him the world’s oldest. Each tree (or “Stem” since it’s all one tree) has identical genetic markers AND even more unbelievably, all share one singular underground root system!

Unfortunately, Pando is believed to be dying. Due to human interference, grazing animals, and climate change, Pando hasn’t ‘grown” for the past 30 or 40 years. But don’t lose hope! Environmental nonprofits are actively working to save Pando and keep him around for thousands of years to come!

Yep. That’s a waterlily so big that a giant bird is able to chill on it. Meet the Victoria Amazonica, Guyana’s national flower. They can reach a whopping 9.8 feet in diameter! They can get so big that it became a popular pastime in greenhouses and botanical gardens for spectators to put their small children and dogs on the lilies and gawk as they walked and crawled around without causing the plant to bend in the slightest.

The plants got their name Victoria because a flower from the lily was given to Queen Victoria as a gift by the Duke of Devonshire, who had immediately fallen in love with the plants immense size and awe-inspiring blooms.

What an innocent looking flower. You may just walk right passed it if you didn’t know any better.

But, assuming you did just walk by this plant, you can expect to feel a little dizzy. Now you’re feeling light headed. Are you getting sleepy yet?

The Henbane’s pollen, which goes airborne, causes people to pass out. In fact, the Alnwick Gardens in the UK has a bench nearby this plant and paramedics on-sight daily for guests who happen to collapse after walking by the plant. The gardens say they have multiple fainting each week.

And if that wasn’t bad enough, ingesting the plant is even worse and creates a whole bunch of funky hallucinogenic effects…oh, and not mention the possibility of death.

Hilarious side-note: Apparently pigs are immune to the bad side effects and tend to enjoy the highs the plant gives them.

So if you ever see a group of pigs having a little too much fun…Beware! A henbane must somewhere near.