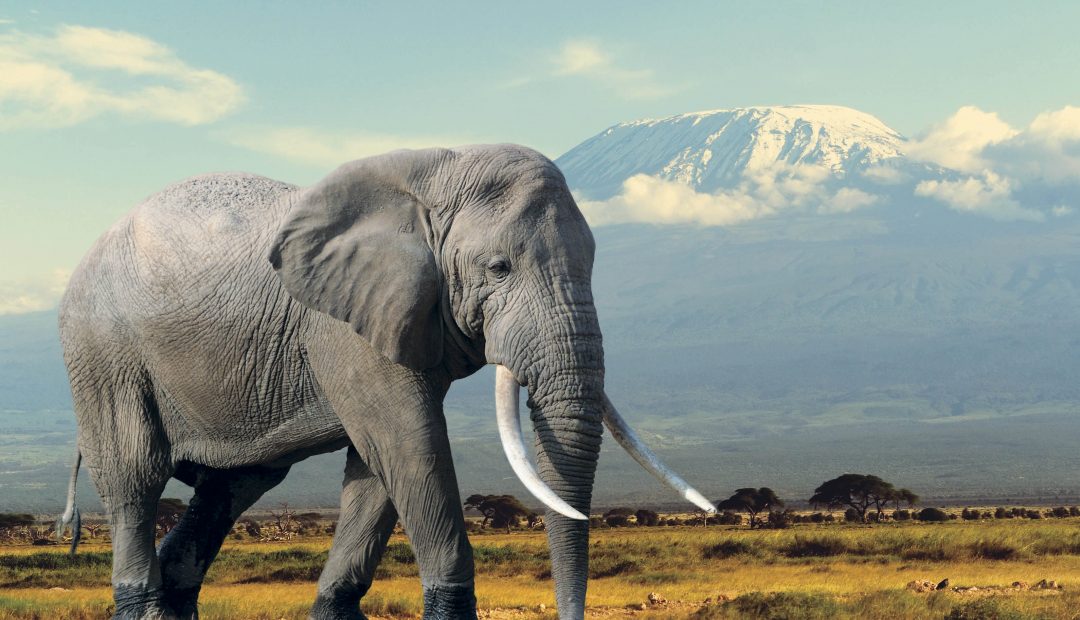 The term “Big 5” was originally coined by hunters, referring to the five hardest animals to hunt in Africa. Sometimes called “big-game hunters,” these groups of people were determined to track and kill the world’s largest, fiercest animals. Tragically, this history of hunting and poaching has led to a significant population decline of all five animal species. Thankfully, in recent years, many African countries have come to embrace their big game species as symbols of pride and beauty, and laws have been placed to keep the animals protected. South Africa even features the Big 5 on its currency. Can you name all five species in the Big 5?Number 5 might surprise you.

Historically, lions roamed throughout almost all of Africa, and up into countries like Isreal, Turkey, and even Greece, and all the way over through Iran into India. Today, their habitat has been reduced to patches within Africa, and one last remaining subspecies in India’s Gujarat region. There’s also a subspecies of lion, The Barbary (sometimes called Atlas Lion) that is extinct in the wild, with only a few of them left alive within zoos around the world.

The two remaining species of lions in Africa (P.l. leo and P.l. melanochaita) can weigh up to almost 500 pounds and are extremely social animals. Groups of lions are known as a “pride” and each pride consists, on average, of about 15 lions. They spend most of their day lounging and resting and are most active at dusk and throughout the night.

Elephants are the largest land animals on earth. To see them in the wild is said to be a transformative experience. They’re also among the world’s most intelligent animals as well, showing emotions like grief and humor, using language to communicate, and even showing the ability to use logic.

African Elephants are the largest of all elephant species, with their shoulder height being 11 feet tall. While the Asian Elephant is smaller and more adapted to running through the lush vegetation of India and Southeast Asia, the African Elephant (especially the Savanna subspecies) are adapted to the wide-open spaces of the African bush. Their strength and power comes from their size and brute force.

Sadly, elephants are rarely as respected as they should be. They’re poached for their ivory, they’re killed for being seen as “pests,” and illegal big game hunts still go on by people determined to get their own Teddy Roosevelt photo. Thankfully, many organizations, like the African Wildlife Foundation, Save The Elephants, and the Big Life Foundation have all been created with the hopes of saving elephants (who are currently listed as endangered.)

Rhinos are some of the most endangered animals in the entire world. They range from Africa, into India, and then down into Southeast Asia. There are a few subspecies of rhino, almost all of which, like the Black, Javan, Sumatran, are deemed “critically endangered” by the IUCN. But these animals are more fortunate than other rhino subspecies. the Northern White Rhino is now extinct in the wild, with the last two animals remaining being two females who are guarded round-the-clock in a zoo in Kenya. Tragically, there have been some rhino subspecies that have been deemed completely extinct within the last 20 years.

When poaching began, the black rhino population dropped by a jaw-dropping 98%, bringing them to the brink of extinction. Luckily, in recent years, their numbers have started to rebound thanks to intensive conservation efforts by organizations like WWF and the International Rhino Foundation.

The second big cat on the Big 5 list is the African Leopard. Leopards historically ranged throughout almost all of Africa and Asia, with historic populations even residing in what is now some of the world’s largest cities, like Hong Kong and Singapore. However, due to their immaculate and vividly striking fur pattern, the fur trade led to massive amounts of poaching. Now, while leopards still range throughout Africa and Asia, their populations are broken up and are largely isolated from each other. This is known as habitat fragmentation.

The African Leopard is rarely seen as a threat to humans, however in India, where rapid urbanization is causing the human population to destroy the habitat of everything around them, leopard attacks on humans have skyrocketed.

Here’s an interesting fact about African Leopards: they’re the best climbers of any big cat. With lions and hyenas threatening to steal the leopard’s kill, the cats have evolved over the years to climb, dragging their kill up into the tree with them to keep it safe from pesky scavengers.

Did you expect an herbivorous buffalo to make the list? Did you know that big game hunters used to call the Cape Buffalo the “Black Death” and the “Widowmaker”? This is because Cape Buffalos are massive and their hides are extremely tough. Like moose, these animals won’t go down with one shot. It was common for Cape Buffalo to charge at the hunters, goring them before they could load their next shot.

However, when not being threatened, the animals rarely attack humans. They’re placid pack animals that travel in herds. However, due to their strength and potential for deadly behavior, they have never been domesticated by humans.

Unfortunately, while the species is still not considered endangered, their numbers have continually dropped over the years due to habitat loss, poaching, and disease. Their historical numbers were at almost 1 million, but has now dropped to around 400,000-500,000. The IUCN has placed them on a watch list, expecting that, before long, they’ll be considered a vulnerable species.

To help the Big 5 continue to survive and serve as symbols of pride and beauty, be sure to check out organizations like the Wildlife Conservation Association, and the African Wildlife Foundation.

Read This: Australia is on Fire and Needs Your Help

The 10 Busiest Cruise Ports in the World