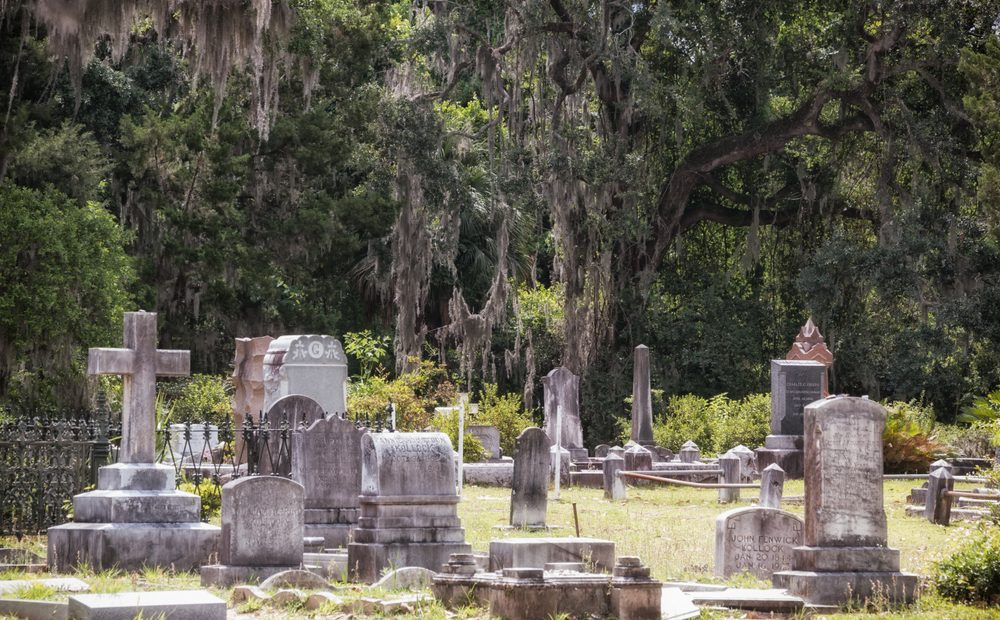 It’s October, and that means ’tis the season of the spooky, the creepy, and freaky. And what better way to celebrate the coming of All Souls Day than a journey around the world to some of the creepiest cemeteries? From Marilyn Monroe’s grave to the catacombs beneath Paris, this list isn’t for the faint of heart.

This giant cemetery in the heart of Argentina is comprised of over 4,500 above-ground vaults, tombs, and mausoleums. Narrow corridors make their way through the massive town of the dead, giving you the feeling like someone, or something, could jump out of one of tombs at any moment. The cemetery is most famous for being where Eva Perón (or, Evita) is buried.

The Woodland Cemetery in Skogskyrkogarden

In the style of true Scandinavian horror, the woodland cemetery is fancifully built right into the middle of the woods. The creepiest part about it about is that it’s almost magical and fairytale like. But with it being filled with the remains of the dead, something about seems more Brothers Grimm than Disney. The cemetery is famous for being the final resting place of actress Greta Garbo, as well as possessing an unmarked grave section. Part of the cemetery is filled graves of the unknown souls, and the public is welcomed to come and offer flowers or hold ceremonies for them. One has to wonder what kind of ceremonies take place…

Savannah, Georgia is the epicenter of Souther Gothic, and their famous and historic Bonaventure Cemetery doesn’t disappoint. Built on an old plantation, this cemetery is home to ornate grave markings, moss-covered willows and cypress, and a lurking sense of both terror and beauty. The famous naturalist John Muir camped out in the cemetery while writing his book A Thousand Mile Walk To The Gulf, “Part of the grounds was cultivated and planted with live-oak about a hundred years ago, by a wealthy gentleman who had his country residence here, but much the greater part is undisturbed. Even those spots which are disordered by art, Nature is ever at work to reclaim, and to make them look as if the foot of man had never known them…”

There is something so scary, yet powerful about Westwood Village Memorial Park. When I lived in LA, I lived a block away from this cemetery and had no idea it existed. It’s extremely small, and is nestled in-between high-rise buildings. If you weren’t looking for it, you’d never know it was there. One day I was going for a walk and saw a small opening into what looked like a park. I stepped inside and found myself in a graveyard. Even more shocking, as I looked around,I soon discovered I was in one of the most famous graveyards on this planet. I walked by the graves of Ray Bradbury, Truman Capote, Tim Conway, Rodney Dangerfield, the Gabor sisters, Hugh Hefner, Don Knotts, Jack Lemmon, Dean Martin, Bettie Page, Donna Reed, Mel Torme, Natalie Wood, and of course, Marilyn Monroe herself. Monroe’s mausoleum stone is covered with pink kiss marks made by fans from all over the world who make the pilgrimage to see her final resting place. With all these names (some of whom died in very suspicious ways) in such a small place, it’s hard not feel an overwhelming amount of power, history, and notoriety. It’s both the light and dark side of Hollywood, all in one place.

There is a massive systems of catacombs underneath the streets of Paris. The underground tombs are known to be extremely haunted. Many paranormal teams have investigated the catacombs and the horror film, As Above, So Below, was set and filmed within the tunnels. And if you’re wondering… Yes, those are actual skulls and bones. The catacombs are home to over 6 million souls. Making it even creepier, during WW2, soldiers on both sides used the tunnels to secretly make their way through the city, and many lives were lost trying to escape the turmoil through the catacombs.

Located on a mountain near Osaka, Okunoin cemetery is known around Japan for being the resting place of Buddhist master Kūkai. The cemetery was founded around 816 A.D. and more than 200,000 monks are buried there. The entire mountain region is sacred to Shingon Buddhists, an esoteric branch of Buddhism that is shrouded in secrecy. Many who visit say it’s beautiful during the day… but extremely creepy at night.

The Most Awe-Inspiring Sacred Places