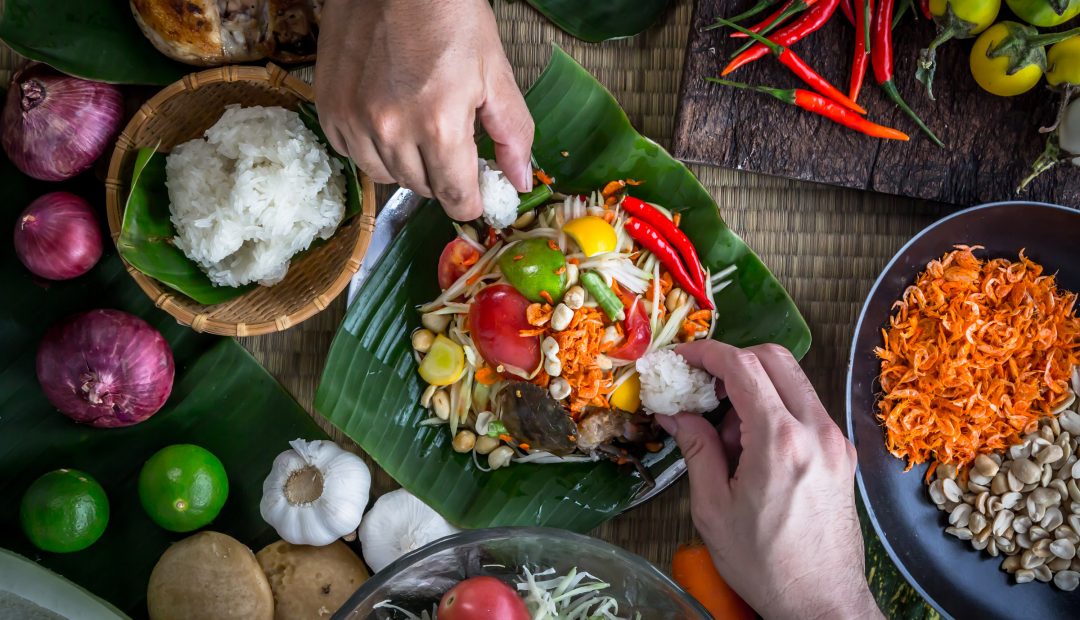 Some would argue that few places on this planet beat Southeast Asia for its beauty, its culture, and its cuisines. Others would claim that no place could possibly top Southeast Asia (abbreviated by some as S.E.A). What everyone agrees upon is that this exciting part of the world is a must to experience.

One of the most notable reasons why people love traveling to this region is the food. Hailed by many as the best in the world, the cuisines of Southeast Asia all have their unique touches, but  they share the use of tropical herbs and produce, the mixing of sweet and spicy, and a vibrant freshness that few cuisines in other parts the world can compete with. In short, it’s a food lovers paradise, and here are six dishes that you must try when you visit.

Nasi lemak, Malaysia’s favorite breakfast dish, literally translates to “fatty rice.” That’s because that big dollop of rice in the middle is cooked in coconut milk, creating the most deliciously smooth flavor your taste buds will ever know. Surrounding the rice are the staples: Fried anchovies, fried peanuts, a hard-boiled egg, fresh cucumbers, and it can be served with or without meat. If served with meat, it will normally be chicken, either in a fried variety, or stewed in a curry. To top it all off, you have that fiery red sambal that’s made from hot chilies. Every bite is the perfect mixture of flavors. The rice brings an umami-like sweetness, the anchovies and peanuts bring the saltiness, the chicken and egg adds heartiness to the meal, and the cucumbers offer a crisp refreshing finish. In short, it quite possibly is the world’s most perfect meal.

As an added bonus, Malaysia has come to embrace nasi lemak with pride. It’s no longer seen as just another workman’s breakfast that’s taken for granted. Now, the hip and trendy restaurants in cities like Kuala Lumpur, Penang, Ipoh, and Melaka serve it all day long, and add their own unique twists. So if you’re too shy to have rice for breakfast…there’s always lunch!

Papaya salad has many different names depending on which country you’re in, and they all have their own variations. Think of it as the American barbecue of Southeast Asia. In the US, you’ll find that Memphis BBQ isn’t like Kansas City style, which isn’t like Texas style. It’s all barbecue…but it’s not the same barbecue. The same goes for papaya salad.

The basic building blocks are relatively the same throughout. Green papaya (unripe papaya) is shredded, and mixed with lime, chili, fish sauce, and palm sugar. It’s normal to have carrot, peanut, some form of long bean, and tomato tossed in. From there, it’s up to the person making it. Sometimes it can be found with dried shrimp, in the Cambodian version there’s crab, and sometimes you may even find banana flower or hog plums. My advice; when given papaya salad, don’t ask what’s in it, just eat it. You can thank me after.

Chicken rice. I will never get married because this dish has already laid claim to my heart. During my time in Singapore, I became a fiend for the stuff. I hunted it down everywhere, and I mean everywhere.

The dish gained international fame after Anthony Bourdain featured it on his show, and from there, the secret was out; Singapore is a food-lovers paradise.

Chicken rice gets its name because the chicken is boiled, and once cooked, is taken out of what has now become broth. Then, the rice is poured into a pot and slow cooks inside, soaking up all that succulent wonder. The chicken is served besides the rice, with a bit of extra broth on the side. You’ll also get cucumbers and three sauces: ginger, chili, and dark soy sauce.

The best chicken rice (and the best food in general) in Singapore is served in hawker markets. These are giant food courts with lots of stalls serving everything you could ever want. Some have roofs, some don’t, none will have air conditioning, and they will all be busy. And this is where you will be eating. Yes…you. Listen honey, no pain no gain.

So, you’ve found a table, you’ve waited in line, you’ve got your chicken rice, now here’s what you do:

First, you need a spoon. The spoon is the platform onto which heaven is built. On your spoon goes some rice, topped with a piece of chicken. Then, add a drizzle of the three sauces. For the perfect bite you’ll need a little of the ginger sauce, a little of the dark soy sauce (which is thicker and sweeter than normal soy), and a little of the chili sauce. Before it goes in your mouth, snag a little bit of that cilantro. After your first bite, you’ll experience what Instagrammer’s call #foodporn. And the best news? That was just bite one. You’ve got a lot left, so dig in and enjoy your #foodgasm.

If you’re in Vietnam, yes, get the pho and the banh me, and all the other stuff that Vietnamese restaurants serve all over the world. But you also need to try the food that is hard get outside of Asia. One of which is banh cuon. This Vietnamese street breakfast is an absolute staple in the country. In this dish, seasoned pork cooked with wood ear mushrooms and shallots is rolled into a spring roll-like shape, but the casing is very different from a spring roll. The wrap that holds it all together is a steamed rice paper. It’s delicate, smooth, slightly chewy, and isn’t fried. Cucumber and bean sprouts can be served on the side, accompanied by a spicy fish sauce for dipping. It’s delicious, it’s unique, and I bet you haven’t found it on the menu in your hometown.

What is nasi campur? The better question is what isn’t nasi campur? But I can tell you the basics. You take a plate and put a scoop of rice in the middle. After that, it’s completely up to the person preparing it. The dish will be served with tons of small portions of different foods surrounding the rice. During my time in Indonesia I’ve had nasi campur with side dishes including marinated egg, satay, tempeh, lawar (a mix of veggies and meat), sambal,Bergedel Tahu (Tofu fritters), and then a bunch of things I was completely unfamiliar with. In Indonesia that’s normal. You will have a lot of meals where things come out and you’ll be like…this looks like it contains vegetables and possibly meat, and there appears to be sauce and seasoning, so here we go…
Think of nasi campur as a culinary Russian roulette, except there’s no losing, just winning.

Back in December, CNN almost caused a war on the Malay Peninsula when it named cendol as one of Earth’s best desserts and credited it to Singapore. Malaysians were pissed, claiming that cendol was rightfully theirs. So what is this dish that holds so much power it can bring a rift between countries?

For starters, cendol (also spelled chendol) is actually the name of the green stuff. They’re noodles made with sweet and floral pandan leaf. Cendol is also the name of the dish as a whole. Shaved ice is topped with coconut milk, palm sugar, the cendol noodles, and sometimes sweet red beans. I understand that it’s not exactly the most photogenic dessert. When I first had cendol, I looked down at my bowl and got a bit weary. But trust me, after one bite you’ll realize that there’s nothing to be afraid of, there’s only a sweet icy coolness to be savored and enjoyed. So whether you’re in Malaysia or Singapore, beat the heat with cendol!

5 Amazing Train Journeys Around The World