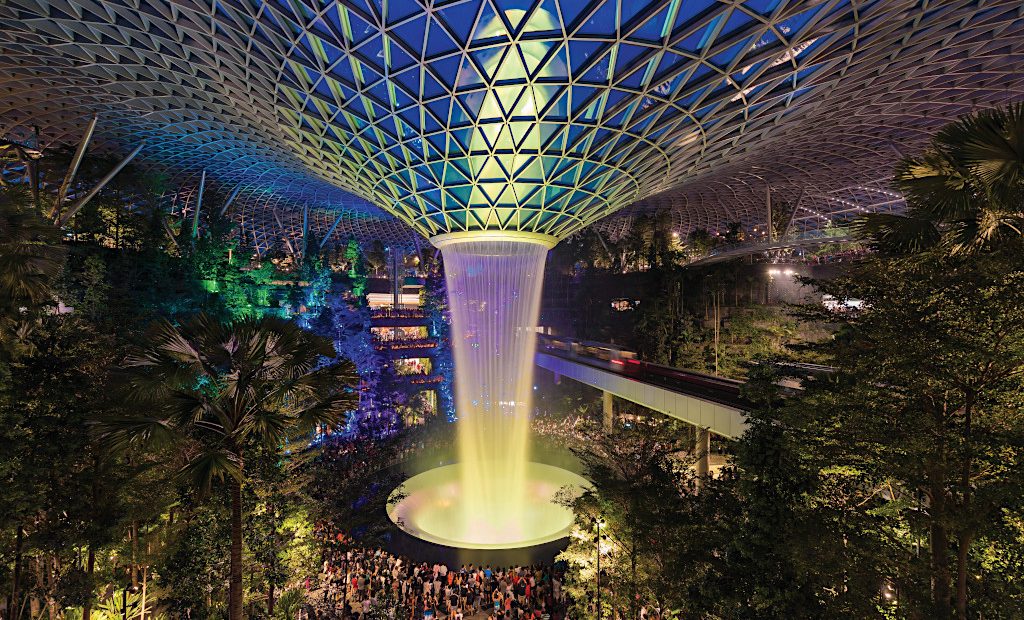 Airport hotels have increased in popularity in recent years with an array of amazing options available to travelers. There is clearly an allure to some of the hotels on our list, from their luxury accomodations and modern amenities to their convenience and proximity to the terminals. Here are some of the most famous and appealing airport hotels in the world.

Starting in London, there is the Sofitel London Heathrow, the 605-room, five-star luxury hotel close to Terminal 5 in London Heathrow Airport. With a beautiful central avenue decorated with flora and water sculptures, a luxurious spa, and dinner at the La Belle Époque, this hotel stands alone as a gem. Indeed, it is often voted Europe’s “Best Airport Hotel.” Fitness studios, meeting rooms, a Vivre demonstration kitchen, and Tea 5 Salon are some other perks.

Back in the United States, there is the TWA Hotel within New York City’s JFK Airport. First opened in 1962, the Trans World Airlines (TWA) Flight Center, later battled with progress and the passage of time till it was saved from demolition after the demise of the TWA itself. New York-based MCR hotels, fourth in the nation as a hotel owner-operator, launched a mission to restore the terminal as part of the TWA hotel. It contains elements of its celebrated past, including the sunken lounge where the Beatles greeted fans in 1965, the old TWA check in area, and vintage memorabilia. The project also made use of the retired propliner “Connie,” now turned into a cocktail lounge accessed by air stairs. The outdoor area also features landing lights and roller/ice rink (depending on the season). The project introduced 512 hotel rooms contained in two flanking wings, with one housing a rooftop observation deck, bar, and pool. There is also the remarkable 50,000–square foot underground conference center and the world’s largest hotel gym.

Hilton Hotels & Resorts is innovating its airport hotels based on customer input and a desire for modernized amenities. One example of their progress is the Hilton Amsterdam Airport Schiphol and its fabulous design from acclaimed Dutch architecture firm Mecanoo. The hotel has scenic landscape views, spacious workspace areas, and soundproofed rooms. The high-ceilinged atrium fosters conversation between hotel guests, particularly with its Axis Lobby and Cocktail Bar. It also has the Vine Room for private events and a 640-capacity ballroom among 23 meeting spaces. For a fast routing between Europe and Asia, staying at  Hilton Helsinki Airport is also a good choice.

Then there is the dazzling Singapore Changi Airport, earing top place on Skytrax’s “World’s Best Airports” list for the eighth consecutive year in 2020. Singapore Changi Airport immediately introduces travelers to Singapore’s Garden City aspect. The overflowing greenery including full trees and themed gardens creates a beautiful contrast with the steel and glass halls. Within this wonderland is Crowne Plaza Changi Airport,  winner of Skytrax’s “World’s Best Airport Hotel” for the last six consecutive years. Located near Terminal 3, the hotel has expanded its technology for amenities, particularly in the Jewel Wing extension. Then there is the  Azur Restaurant, mixing Western and Asian cuisine, after which one can enjoy the outdoor pool, spa, and gym. The hotel is also near the first ever airport butterfly garden in Terminal 3 and the 10-story nature themed expansion centered around an indoor waterfall, or the “Rain Vortex.”

For more on the world’s best airport hotels, click here.

Can Americans Renew Their Passports Online?