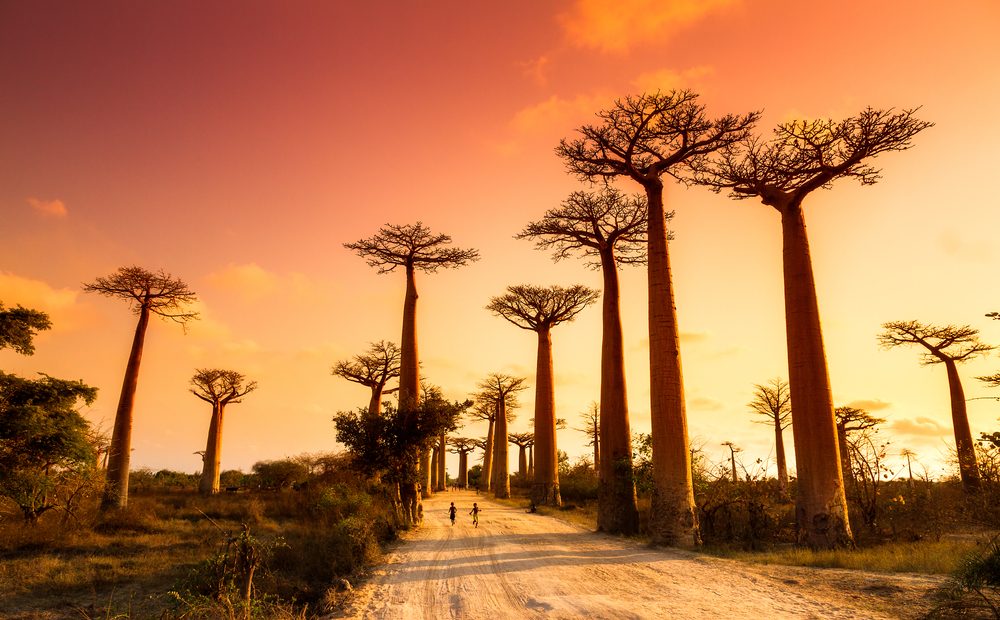 Trees. They provide oxygen, shade, and a home for animals. They also filter carbon, purifying our planet’s air. They’re (for the most part) aesthetically pleasing and have actually been scientifically proven to be beneficial to our mental health.But before you run outside to soak up some flora-power, read on to discover the seven coolest tree species from around the world!

Joshua trees (Yucca brevifolia) are the largest species of yucca on the planet and are sometimes referred to as “Yucca Palms.” The name Joshua Tree is said to come from Mormon settlers who crossed the desert in the 1800’s. They saw the trees and said it looks like a man holding his hands to the sky for guidance, just like Joshua from the bible.

Joshua trees are endemic to the American Southwest and live around 500 years. The trees, and the national park named after them, have been in numerous films and television shows, served as the cover photo of an Eagles album, and of course, were made world-famous after U2’s smash hit album, The Joshua Tree, which went Diamond and reached number one on the Billboard charts.

One of the world’s deadliest plants, the strychnine tree (Strychnos nux-vomica) has been the cause of many murders throughout human history. The toxin is commonly used in rat poison and was easily obtainable. Making matters worse, the symptoms of strychnine poisoning are very similar to tetanus, making it an easy tool for assassination. It was even used to make poisoned arrows by many tribes.

Much of the poison comes in the tree’s lime-looking fruit. Inside the fruit is a white powder that is extremely deadly. In fact, it’s so deadly that areas that have strychnine trees are normally labeled, warning people not to get too close. When the fruit falls from the tree, they can pop open as they hit the ground, sending a cloud of poisonous powder into the air. And this isn’t even the tree’s only poison…the bark contains brucine, another toxic alkaloid.

Grandidier’s Baobab (Adansonia grandidieri) are giant baobab trees endemic to the African island of Madagascar. The trees can grow to almost 100ft tall and their trunks can be 10 feet in diameter. The giant trunks are useful for storing water during dry seasons.

The tops of the trees produce leaves, flowers, and fruit, and are a favorite of lemurs, who are the trees main pollinators. Sadly, these trees are currently listed as endangered due to humans. Loss of habitat and the death of many pollinating species means that baobabs face critical threats to their continuation as a species. Another issue is that baobabs live for a long time, up to 1,000 years. This means they’re slow-growing and throughout their lives will experience numerous changes in their environment. For example, when Madagascar’s baobabs first came to maturity, there were numerous animals, helping to pollinate and spread seeds, that are now completely extinct. Some say, “If walls could talk,” but what if baobabs could talk?

The giant sequoia (Sequoiadendron giganteum) is the last remaining species of sequoia left on the planet. They’re also the most massive trees on Earth. General Sherman, the most famous sequoia, weighs in at 2.7 million pounds. Sequoias also have a trunk diameter of up to 26ft and can reach up to 300ft tall.

Sequoias have been put through a lot since their discovery by Europeans. They’ve been carved, allowing cars to drive through them, they’ve been turned into houses, and even featured as prehistoric oddities in fairs around the world. Now, after years of harvesting, the trees are listed as endangered. Luckily, Sequoia and Kings Canyon National Parks have been created to keep the tree’s habitat safe and secure. Unfortunately, national parks can’t protect the trees from climate change. And in a state that’s becoming known for epic droughts and raging forest fires, the future of the mighty sequoia is once again in question.

Alpine and Arctic Areas of the North Atlantic

The dwarf willow (Salix herbacea) is the world’s smallest tree…or is it? This tiny little plant has caused controversy amongst arborists who debate whether or not the world’s smallest tree is even a tree. On the one hand, there are those who argue the definition of a tree. According to Merriam-Webster, that is “a woody perennial plant having a single usually elongate main stem generally with few or no branches on its lower part.”

So, if a tree, by definition, needs to be elongated…can something that’s only two inches tall be a tree?

On the other hand, the dwarf willow is indeed a willow, which is a tree species. It’s related to the same giant “weeping willows” we so often see next to lakes and ponds.

So, some say it’s a tree. Some say it’s not. But one thing is for sure. The dwarf willow is a member of the Salix tree family…and it only stands (at most) two inches tall.

Those trees haven’t been painted, that’s just the way they are. Why such dramatic color-changes in the bark of the rainbow eucalyptus (Eucalyptus deglupta)? Well, strangely, not much scientific research has been done on that, so David Lee of the Florida International University decided to do a little experiment to find out. What he discovered is that the bark of the tree is filled with bright green chlorophyll. As the bark ages, it becomes filled with reddish tannins.

The reason why the tree shows so many different colors is because the bark sheds in little patches at a time. And as the exposed bark ages, it changes from bright green to dark green to orange to red to purple. And since it sheds in little bits at a time, what you see is the various stages of the bark’s color change. Pretty cool, right?

The Indian Banyan (Ficus benghalensis) is the national tree of India, and for obvious reasons. It’s sprawling vines and massive canopy served as roofs for temples and houses and provided a great and easy place to climb up and stay protected from predators.

The Indian Banyan has the largest canopy coverage of any tree in the world. In fact, one such specimen named Thimmamma Marrimanu holds the world record for the largest tree canopy on the planet, covering more than 205,000 sq ft.

If you want to hear something creepy, here you go. The Banyan tree is basically a parasite. According to the Smithsonian, “The banyan is a kind of strangler fig tree, and unlike most plants, which grow from the ground up, it thrives when it grows from the sky down. The seed catches in the branches of another tree and the young sprout dangles a braid of tender tendrils down to the forest floor. When that braid hits the soil, it takes root there, and the aboveground part thickens and hardens. The banyan becomes its host’s coffin: It winds around the original tree, growing branches that rob the host of sunlight. Its roots spread underground, depriving the host of nutrients and water. As the banyan grows, more “prop roots” descend from the branches to support the enormous canopy.”

Famous Faces Help Illinois Spread the Word to Stay Inside