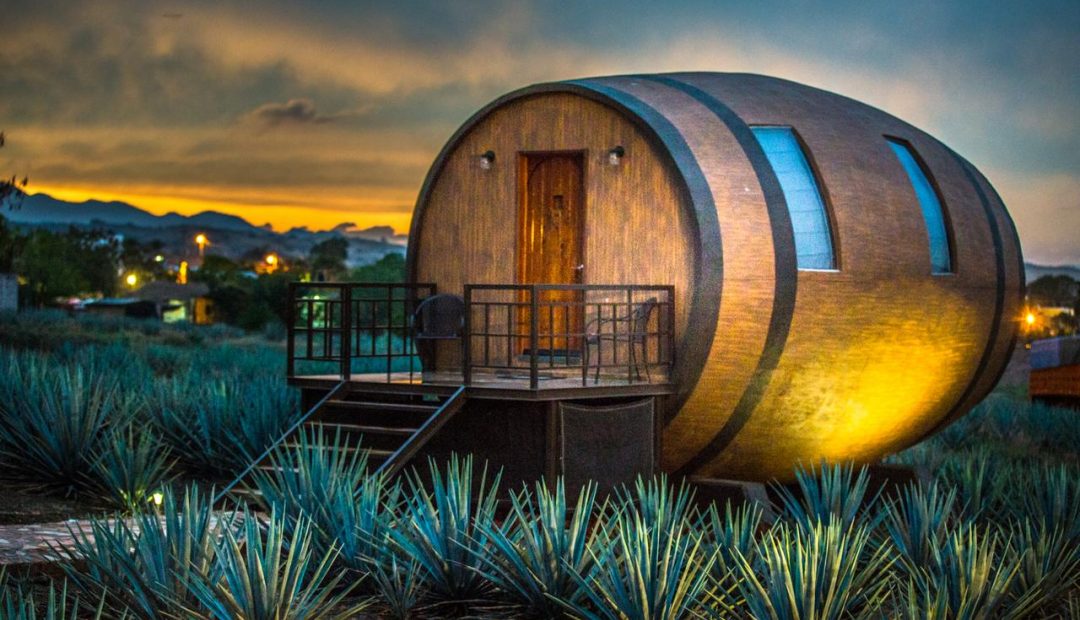 When deciding on where you want to go for your next vacation, the hotel or resort may be the most important choice you’ll make. The world has some amazing places to stay that may just inspire you to pack your bags for a totally new and exciting destination. Here are some of the most unique hotels across the globe. Which ones would you like  to stay in?

When in Mexico it is only natural to take tequila shots, but one hotel in the town of Tequila takes it a step further. At Matices Hotel de Barricas your hotel room is a giant tequila barrel. The hotel is owned by the Hacienda Tequilera La Cofradía tequila distillery and is located right in the middle of their agave plant field’s, making it a picture perfect site. It is walking distance from the main distillery where they offer tours, tequila tastings, and you can even design your own tequila bottle. It also features its own underground cave restaurant, La Taberna Del Cofrade.

Barrels can be booked starting at $175 per night and each barrel is equipt with kingsize beds, sofas, air conditioning, and a mini-bar. It is just like staying at a normal hotel except you’re inside a barrel and there is a lot more tequila.

Spend a night under the sea at the Poseidon Undersea Resort. Located off a private island in Fiji, it is one of the most luxurious hotels in the world. While laying in bed you can watch sharks, dolphins, and schools of colorful fish swim all around you. The hotel is 40 feet below sea level and includes 25 suites, a spa, restaurant, bar, gym, dive shop, and a conference room that doubles as a wedding chapel. There are plenty of activities to do while staying there like renting a personal Triton submarine, scuba diving in the lagoon’s clear water, and riding as a passenger on a 1,000-foot luxury submersible.

To stay at this exclusive hotel, packages start at around $15,000 per person for seven days and six nights at the tropical location. Though it is pricy, it is a once in a life time experience.

Prepare to step into the future at the Henn na Hotel in Japan. When checking in at the front desk you won’t be greeted by your typical hotel staff, but a robot dinosaur. Henn na Hotel is recognized by the Guinness Book of World Records as the first hotel in the world to be almost entirely staffed by machines. Starting with its first location in the Huis Ten Bosch theme park in the southwestern prefecture of Nagasaki, it has since expanded to 12 locations across Japan, with even more coming soon. At the front desk, you will be greeted by multi-lingual robots that will help you check in or out, robotic arms will store your luggage for you, and in their new Henn na Cafe get your coffee from robotic baristas.

Depending on the location, rooms start at around $80 per night. Everything in your room is motion or voice activated, from the lights to the toilet. There is also the option of using facial-recognition to unlock the door instead of a key card. Staying a night at any one of their locations is like taking a glimpse into what hotels could look like in the future.

Have all your fairy tail dreams come true when you visit the town of Heyd, Belgium. When you walk into La Balade des Gnomes it is like entering a fantasy land. The hotel’s motto describes it perfectly, “all that you can imagine is real”. The hotel features 11 different rooms and is each inspired by a traditional fairy tale. There is one inside a giant Trojan horse, another where your sleep on a boat with real sand in the room, and suites filled with starry skies, wooden toadstools, and cute crooked windows.

Room’s start at around €125 per night and include breakfast each morning before you begin your adventure for the day. A stay in any one of the rooms is worth the trip to the quaint little town, and if you’re lucky you might find a Gnome in your bath tube.

At Giraffe Manor in Nairobi, Kenya guest are treated to its green gardens, elegant interior, sunny terraces, and many courtyards. The beautiful architecture is not the only things guests are there to see though. Giraffe Manor’s residents include real Rothschild’s giraffes who often come to the hotel and poke their long necks through the windows to say hello to guests and maybe take a bite out of your breakfast. The hotel is directly next door to the Giraffe Centre, a sanctuary for these endangered animals, so they roam free between the grounds.

To stay in one of the 12 rooms prices start at around $620 per adult. This includes accommodations in the rooms, all meals and most drinks, and a chauffeured vehicle for all your sightseeing needs.

Climb aboard The Queen Mary to spend a night on a ship overflowing with history. After its maiden voyage in 1936 it has been repurposed many times from a passenger ship, to a transport for troops during the Second World War, to now a hotel and museum. It is permanently docked at the port in Long Beach, California and is known as one of the top places to visit while in the area. Stay the night in one of its original 347 staterooms and suits. Be careful though, The Queen Mary may not look like it but it has been called one of the most haunted places in the world. Throughout the years staff and visitors report unusual occurrences with ghosts and alarming sounds appearing throughout the ship. From screams in the boiler room to a little girl haunting the halls, staying here many not be for the faint of heart. If you’re feeling brave enough you can even book a night in the infamous Stateroom B340, which has seen some of the most recorded paranormal activity on the boat.

Stateroom’s can be booked at around $95 per night and there is plenty to do during your stay. The boat offers historical and ghost tours of the ship, Sunday brunches on deck, and different spaces to hold events like company retreats and weddings.

6 Careers That Will Pay You to Travel the World!