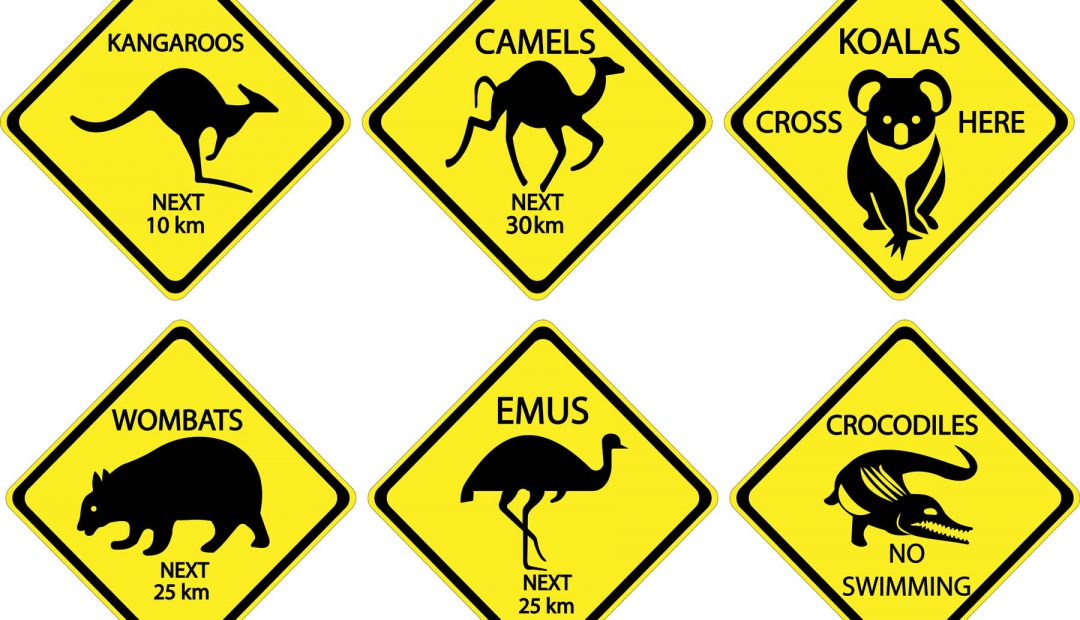 Stop signs, yield signs, speed limits—road signs can be so dull…but that isn’t true everywhere. In some places around the world, driving can be filled with more adventures than you can imagine. In certain areas, fascinating encounters lurk around every corner. Luckily for us, these handy road signs are there to let us know exactly what strange and mysterious things lie ahead!

Forget about a deer running in front of your car. When driving in the open South Australian plains, you’ve got bigger problems, literally. Camels, wombats, and of course, kangaroos can cause big problems for your car if you hit them. Camels, being massive, are sure to ruin your car, and possibly take your life. Kangaroo, like deer, move quickly, and even if you’re obeying all the laws of the road, it’s hard to have enough time to react to one traveling at top speed. And wombats…well, do you know how adorable they are? You couldn’t possibly hit one! The craziest kangaroo accident though didn’t happen in Australia, but oddly enough, in Montana.

Having grown up in Ohio, I had never known that seeing Amish Crossing signs was weird. When you got out into the cornfields, it was normal to see them. Even in town, groups of Mennonites would regularly arrive by horse and buggy at the diner I worked in. But then I left the Midwest and discovered how unique Amish Country really is. So for anyone wondering if you really do see Amish people with their horse and buggies, slowly traversing down the road. Yes, It’s very much a real thing!

Primate crossing signs are fairly common in regions throughout Asia and Africa. What makes this particular sign so crazy is that it’s located in the middle of Kuala Lumpur, a metro area of over 7 million people!  Also, this is probably a sign that you’ll want to take note of. Malaysia is booming, and the metropolis of Kuala Lumpur is ever-expanding into the surrounding rainforest.

The area’s macaques are not happy. Gangs of monkeys can be seen raiding dumpsters, stealing food from people, and even mugging pedestrians, stealing their backpacks, wallets, phones, and cameras. But hey…if your home was being destroyed, wouldn’t you do the same?

These two back-to-back roadsigns are along a coastal road in Taiwan, warning drivers that the road ahead is about to be embanked over the ocean, and oh yeah, large waves during storms have been known to wash cars off into the sea… happy driving, everyone!

At some point in time, some Kiwi bloke realized that the kiwi crossing signs looked like the bird was skiing. So, with his buddies, he drew skis onto the sign, and before you knew it, they started popping up everywhere. This little guy even has his own warm winter hat!

Kiwis (the bird, not the people) are small ground-birds. The signs have nothing to do with a kiwi potentially destroying your car if you hit one, it has to do with the fact that they’e endangered. Growing cities and farmland are destroying their habitat, and introduced species like stoats, dogs, ferrets, and cats kill large numbers of kiwi chicks.

Need a sweet Kiwi fact to fall in love with the flightless bird? Once they mate, they’re monogamous (how cute!)

Along New Mexico’s Turquoise Trail Scenic Byway, you can find this amazing sign warning that abducted cows may be ahead. The sign was created for two main reasons: First, New Mexico’s Roswell Event is the most famous UFO encounter in history, sparking movies, TV shows, books, and a full-blown government investigation. The cow connection comes in for an equally eerie reason. In many areas of New Mexico that started having UFO sightings, strange ‘cattle mutilations’ soon followed. Livestock was being found dead, drained of their blood, with patches of skin removed, being cut out in clean, precise lines. The weirdest part was that when found, there were no footprints anywhere around the animal…not even the animal’s. So, when driving through New Mexico, keep your eyes peeled.

If UFO’s and mutilated cows weren’t enough to scare you, how about the very real threat of bees? The increased droughts that California sees year after year are causing its bee population to get desperate. We think of bees of as collecting pollen, but we rarely remember that, like all other living things, bees need water.

With the extreme lack of water in the California desert, made only worse in recent years, the bees have become frantic. Once, a man was stung over 100 times in Joshua Tree by a swarm of bees. People worried it was another case of Africanized bees, but it was later revealed to be average honeybees. When thirsty, the bees will be drawn to any water source, including a sweating person. In fact, just a few days ago parts of Joshua Tree were closed, and will remain closed during parts of the summer because of bee activity.

Rather than going for one of those boring old moose signs, this road in Newfoundland decided to show drivers why you want to avoid moose. Moose are sort of like tanks. They’re massive and are made of almost pure muscle, not to mention the gigantic antlers. If you hit one, your car will be totaled, and you will likely be severely injured. Don’t believe me? Well, let me just read you this actual news headline, and then perhaps you will: Half-Ton Moose Causes 9-Car Pileup. (gulp…)

THE ROAD FROM HELL

For those who like to live dangerously, this road in Thailand has a steep incline which can cause large trucks to slide, and it’s a dangerously windy road. To top it all off, it’s also a rockslide area! And if you lose control, or try to swerve out of the way of falling rocks, you’ll end up in the ocean.

Delicious Desserts Named After Destinations In The USA